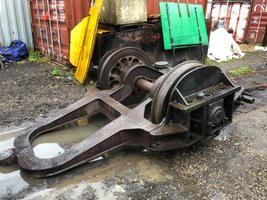 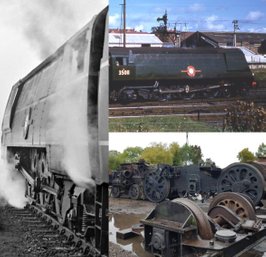 Be part of an exclusive club and aid the overall restoration of 21c11 / 35011 General Steam Navigation by becoming a Trailing Truck Transformer.

The Trailing Truck currently with 21c11 / 35011 is unique in preservation as being one of the later fabricated type that replaced her original cast type in 1955. All other preserved Merchant Navy locomotives have the cast type.

The Trailing Truck  was removed from the frames at the same time as the successful boiler lift on 2nd October 2020. The aim of the Fund Club is to raise £15,000 to enable the GSNLRS to proceed with the full refurbishment, overhaul and certification of the Trailing Truck by specialist contractors North Norfolk Railway Engineering.

We are offering a maximum of 30 members to purchase a 'Lot' for £500. Members are welcome to purchase as many 'Lots' as you wish up to the maximum target amount.

Lots can be purchased as a single payment of £500 per lot or by five monthly payments of £100 each lot.

Members of the Fund Group would receive a number of benefits including:

Currently we are pleased to advise that twelve of the thirty 'Lots' are now spoken for, but we still need new members to join and be a part of the 'Trailing Truck Transformers'

Due to the initial response of members joining the Trailing Truck Transformers Fund Club we have, on 03/08/21, been able to award the refurbishment contract to North Norfolk Railway Engineering.  New members however are still required to enable to complete the work, see how to join below.

We are grateful to the folllowing honoured members, with at least one 'Lot' each,  of the exclusive Trailing Truck Transformers Fund Group to date:

You can make either single or regular donations via bank transfer using the details on the applicatation form here. Please email a completed application form to confirm membership of the club.

See also our how to put Funds in the Frames here.