The mechanics of motion project

As part of our aims to not just to restore 21c11 / 35011 to original condition, we also endeavour to promote education in technology and engineering associated with the preservation and restoration of heritage steam. Therefore in conjunction with the University of Birmingham, we are running a project looking at the mechanics of the motion of our locomotive, focussing on the crank axle and chain-driven valve gear, using Finite Element Analysis (FEA). CFD and FEA are tools that are widely used throughout industry to explore designs and conduct virtual testing, for example by Formula 1 teams or Rolls-Royce.

For our crank axle to be certified to run our locomotive on the mainline, we need to either demonstrate that we are using the same grade of steel originally used, “grandfathering” the design, or we are using a modern equivalent that meets or exceeds the performance of the 1954 design. As the metallurgical industry, especially the supply chain, has evolved over the past 60 years, finding a suitable supply of the steel that was originally used is proving challenging.

We have suggestions of alternative steels that could be used that have been provided by colleagues involved in other locomotive projects, notably A1 60163 Tornado and P2 2007 Prince of Wales. 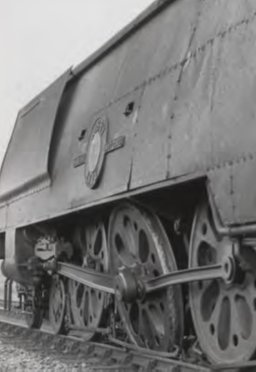 A known issue with the original design of the engine when it was running on British Railways in the 1940s-1950s was the crank axle; on 24 April 1953, the crank axle on the central driving wheel of No. 35020 "Bibby Line" fractured, see picture right, whilst approaching Crewkerne station at speed. No-one was injured, but the incident resulted in the withdrawal of all Merchant Navy class locomotives from service whilst the cause was ascertained. An examination of other class members showed that the fracture, caused by metal fatigue, was a common fault. The incident resulted in a re-design and replacement of the crank axle, after which there have been no known failures of the axle. 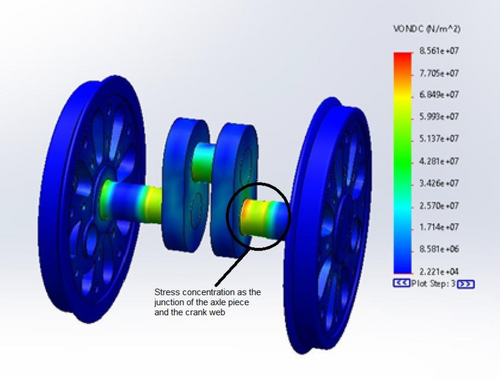 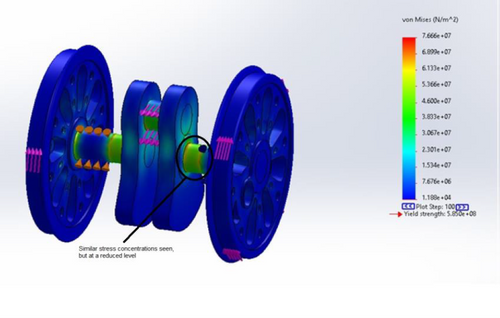 Figure 1. The simulation of the axle and it's lifing, with some simplifications in the steel material properties and duty cycles. To aid viewing, the chain driver sprocket has been hidden, but it shows that the life of the axle close to the sprocket is much lower than the rest of the axle, so this is where we would expect failure to occur, matching the failure seen on 35020 at Crewkerne in 1953.

The analysis has demonstrated that A4T steel is of a suitable grade for the correct balanced crank axle design for 35011 in original design condition.

Beyond this, whilst the initial goal of this project was to start looking at material choices for the replacement crank axle, this has since broadened to designing parts of the valve gear for which the relevant drawings are missing, such as the chain drive sprocket on the crank axle itself.

Further details of the project outcomes will be published here following their peer review in due course.