The Somerset and Dorset Tour 50 years on! by Alan Swinburne 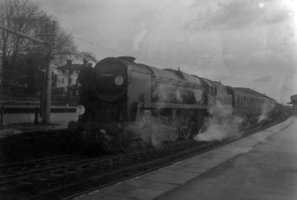 On Sunday 2nd January 1966, I joined a special train at Waterloo organised by the R.C.T.S. which had an interesting itinerary over the soon to be closed Somerset & Dorset routes. The other appealing aspect of the excursion was the variety of motive power provided to cover the different sections of thejourney. We had no less than 6 different engines to haul us in the course of the day and two trains were double headed!

In summary this was the line up:

The motive power nicely reflected the Midland Railway and Southern Railway heritage of the S& D line with no GWR input! 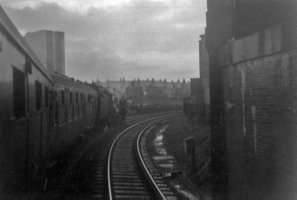 Our train was made up of 10 coaches and was well patronised. We left Waterloo at 8.30 on a schedule of 58 minutes to the first stop at Basingstoke. The somewhat leisurely schedule reflected that it was a Sunday and there were various PW slacks in force for work on the Bournemouth electrification scheme under way at this time.After a very slow start to Clapham Junction (this took 10 minutes) we worked up to 67mph at Hersham before the first PW slack between Walton-on-Thames and Weybridge. After passing Woking at 56mph we maintained a steady 62mph up the gradients to MP31 and touched 64mph before the next slack at Farnborough. After another PW slack at Hook we reached Basingstoke about 5 minutes late. After 2 more PW slacks near Micheldever we had the chance for some faster running and managed 82 mph just before Winchester and again near Shawford before slowing to 62mph at Eastleigh. This was followed by another 73mph after Swaythling before stopping at Southampton for water. After Southampton more engineering work prevented much fast running onto Bournemouth and Broadstone apart from a peak of 66mph near Beaulieu Road. Our arrival at Broadstone for our first engine change was nevertheless on time in just under 3 hours from Waterloo and we climbed the 1 in 75 bank up to Broadstone at a creditable 37 mph. 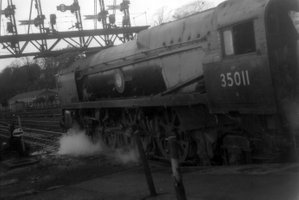 From Broadstone on the S & D proper we were allowed a 70 minute schedule for the 37.2 miles to Evercreech Junction and despite an unscheduled 2 minute stop at Templecombe our double-headed train reached Evercreech Junction in just over 59 minutes! Most of the way our speed was in the 40’s and 50’s which meant we could enjoy the scenery! After Evercreech Junction there is a steep climb of 1 in 50 for about 6 miles up to Masbury summit; we enjoyed plenty of exhaust noise from the two locomotives as we went up at a steady 27 mph. Both engines kept to schedule on the continuation throughMidford to our next stop at Bath Green Park, with a top speed of 53 mph at Wellow on a stretch of line with many speed restrictions but lovely views.

Bath Green Park was a terminus station and we had our next change of power. Our fourth engine of the day was Stanier 8F 2-8-0 No.48309 which took us along the Midland line to Bristol through MangotsfieldNo great speed was attained on this stretch but we reached 45mph on the rising gradients near Mangotsfield. Signal checks delayed our last five miles down into Bristol Temple Meads where we stopped for ten minutes. We then continued on Western Region metals from Bristol to Highbridge West via Weston-super-Mare, a journey of 28 miles for which we were allowed a schedule of forty minutes. This entailed unspectacular running at about 50mph most of the way. At Highbridge West we had to get off the train and walk to the Highbridge Somerset & Dorset station whilst the train was shunted onto S & D tracks. Meanwhile haulage was switched from the 8F 2-8-0 to double headed Ivatt 2-6-2 tanks Nos.41307 and 41283; these took us along the Highbridge branch through Glastonbury back to the S & D ‘main line’ at Evercreech Junction, where we had a five minute stop. Speed on the branch line was moderate at about 45mph but was an interesting ride, especially near Glastonbury. Because of the delayed departure from Highbridge we were now running about twenty minutes late but despite a top speed of 52mph near Wincanton we arrived at Templecombe still about twenty minutes behind time. 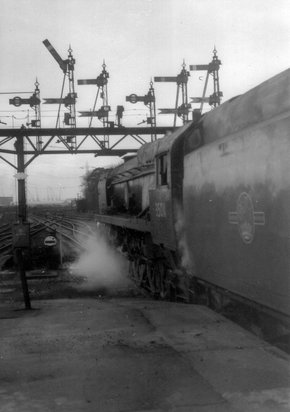 Our Merchant Navy class 35011 ‘General Steam Navigation’ was waiting at Templecombe to take over for the final leg of the tour back up the LSWR mainline to Waterloo through Salisbury with one scheduled stop at Basingstoke. Smart working recovered five minutes of the deficit, so our departure was just fifteen minutes down on schedule. The initial start from Templecombe is helped by a 1 in 80 descent and we rapidly worked up to 69mph and covered the first four miles in under five minutes! This included the subsequent climb up the 1 in 100 bank to Buckhorn West tunnel and the top of the bank was cleared at 52 mph. The next twenty one and a half miles onto Wilton was then covered in just over 19 minutes, including the four mile climb of Semley bank. Top speeds of 75mph were sustained on the more favourable stretches to Wilton where we slowed for the speed-restricted section onto Salisbury. After Salisbury, Porton bank was climbed at 56mph and a top speed of 76 mph was reached before slowing to 60mph through Andover (signal check?). Further brisk running after Andover onto Basingstoke included 74mph at Overton before stopping at Basingstoke only six minutes late. We had covered almost sixty five miles in under sixty nine minutes start to stop. Despite reaching 75mph through Hook and some fast running in the 70’s between Woking and Esher, major engineering works between Winchfield and Farnborough put paid to any more time recovery on the final leg to Waterloo. Our final arrival was about eight minutes late (seven minutes had been recovered) but this was no fault of the engine or crew who had done their best to recover time and given us some fast running where it was possible.In conclusion, we had covered a total of 369 miles entirely steam-hauled (not a diesel in sight!) and had the satisfaction of travelling over the whole of the Somerset & Dorset line in its final phase of operation before closure in the Spring of 1966.

Orignally published in our members magazine The Packet, issue 3 - January 2017

Note: Images on this page courtesy and copyright P Stringer from  top to bottom: Basingstoke, rounding the curve towards Southampton, and the last two taking water at Southampton.

A Further article on these tours can be found here