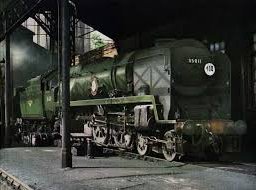 Paul Silvestri provides a selection of logs that is representative of normal running on scheduled service trains during the period 1959 to 1965, ie after GSN had been rebuilt.

They were not recorded when drivers were attempting to break any records, but simply trying to keep time, or regain time if possible. In any case, why would you want to run early on such a densely occupied main line, when the chances are that you would be baulked by the train in front, especially on the approaches to London. The logs were made by a variety of recorders and have all been accessed from the Railway Performance Society* archive. (*Anyone with a particular interest in traction performance, both historic and current, is referred to the RPS website www.railperf.gov.uk where members can access a huge amount of material and information.)

The majority were recorded on Southampton/Bournemouth services, and most of these on the Down. It will be noted that the tonnages stated by the various recorders do vary somewhat, even for trains with the same number of vehicles, due to the different types of stock employed. In particular, the standard 11 coach load of the Bournemouth Belle reflects the heavier weight of the pre-war Pullman coaches. It is also apparent that poor train regulation afflicted several of the runs, with signal checks preventing punctual arrivals.

The first part of this review looks at runs on the line from Waterloo to Winchester, Southampton and Bournemouth. For those of you that are unfamiliar with the route profile, it is mostly level or rising on moderate gradients (maximum 1 in 249) from Waterloo to the summit at Litchfield tunnel (between Wooton and Roundwood), then falls at 1 in 252 almost continuously to Eastleigh. This section is the toughest test for Up trains, especially those calling at Winchester.

Column 1 shows a fine run on the “Belle”, twice touching 80 mph, and which would have kept the tight schedule but for a check to 15 at Winchester and another to 25 after St Denys.
The second run on the “Belle” in column 2 suffered from very poor regulation for this premium train, with no less than 3 signal checks and unusually low speeds in the 50s between Woking and Worting Junction, which also suggests that the driver may have been sighting caution distant signals.
Column 3 presents a very sprightly performance, touching 84 mph after Wallers Ash on the descent from Litchfield tunnel. There were significant gains of time on all sections except Winchester to Southampton, which was spoilt by signal checks.

Column 1 shows a run which did just enough to keep time as far as Winchester, then achieved 80 before a check at Eastleigh robbed it of a punctual arrival in Southampton.
Column 2 is a superbly judged piece of locomotive handling, which maintained the schedule to within seconds, before arriving at Winchester 1 minute early.
Column 3 has Driver King gradually pulling back time from the initial permanent way slack at Vauxhall without exceeding 74 mph, until a maximum of 82 on the downgrade after Micheldever was curtailed by a severe signal check. However, the driver had sufficient time in hand to achieve a slightly early arrival at Winchester.

Driver Tester had a slightly easier load in Column 1 and an easier Sunday schedule. He made an unusually brisk time to Hampton Court Junction, and with speeds up to the low 70s as far as Basingstoke, and another 80 coming down the hill through Wallers Ash, he actually bettered the schedule of the Bournemouth Belle.
Driver Davis had a heavier load of 13 coaches in Column 2, but managed to achieve similar speeds to column 1 over much of the route. However, he was unable to fully recover the handicap of two signal stops between Esher and Walton, arriving 3 minutes late at Winchester.
The third of the 3 runs recorded by C Hudson is on another 13 coach load, which with an unchecked run bettered the schedule on both sections without over exerting the locomotive.

Regrettably, no schedules are shown for the runs in columns 1 & 2, so it is difficult to make a judgement on the standards of performance. The first run appears to make a very sluggish start with a relatively light load, which suggests the loco might have been hastily prepared for this job. Once it was over the summit, however, GSN was given quite a free rein, reaching 80 between Basingstoke and Hook and 79 at Hersham. The overall time though was not spectacular for a completely unchecked run.
Column 2, with a 13 coach load, made good time from Bournemouth to Southampton, and achieved a sustained 66-67 mph on the 1 in 252 after Winchester, before being hobbled by a signal check at Micheldever. The continuation to London was hampered by a severe pws at Weybridge and a succession of checks into the terminus, taking almost 20 minutes for the final 7 miles.
Column 3 had a load of just 300 tons on a Sunday semi-fast, which convincingly bettered the schedule on 3 out of the 6 sections. (The recorder of this run notes that it was diagrammed for a light pacific.)

Just under a year after rebuilding, GSN put up a very creditable performance on this heavy 14 coach load. 58 mph was maintained on the ascent past Hinton Admiral, with a maximum of 73 on the undulating stretch through the New Forest. I suspect the driver was encountering adverse signals after Totton. The load took its toll on the ascent to Roundwood, although a sustained speed of 54 was sufficient to improve on the schedule to Worting Junction by 2½ minutes. Speed was maintained in the 70s all the way from Basingstoke to Esher, with a maximum of 80 at Byfleet. But the driver paid the price of running almost 3 minutes ahead of schedule, encountering a series of signal checks after Surbiton, but still contriving to arrive at Waterloo precisely on time.

THE WEST OF ENGLAND LINE

We now turn to the route from Waterloo to Salisbury and Exeter Central. This line is less well represented in the Railway Performance Society archives, mainly because soon after rebuilding, 35011 was allocated to Bournemouth shed. Unfortunately, there are no logs of runs on the Down with 35011. However, I have found 2 runs recorded on the Up Atlantic Coast Express immediately after rebuilding, but before transferring to Bournemouth.

The gradient profile of this route is more demanding than the Bournemouth line for both locomotive and crew, becoming a veritable switchback beyond Salisbury. From Worting Junction the line mostly descends to Andover, with the last 3 miles at 1 in 178. It then climbs to Grateley, at 1 in 163 for the final 3 miles, before desending again to Salisbury. Beyond Salisbury, there are no less than 7 summits, at Semley, MP 107½ (Gillingham Tunnel), MP 113½ (Milbourne Port), MP 126¼, MP 133¼, Honiton Tunnel, and Exmouth Junction. The gradients are also more severe, with significant sections at 1 in 100 and 1 in 80.

The train in column 1 departed from Salisbury 2 minutes late, which it had regained as early as Andover. Up trains from Salisbury are faced with a 1 in 169 ascent within 2 miles of the start, so Driver Allen did well to achieve 51 mph with a 12 coach load on the steepest section of 1 in 140 through Porton, recovering to 62 mph on the easier gradients to the summit just before Grateley. Speed rose to 82 in the dip through Andover, followed by a minimum of 67 on the 1 in 178 towards Hurstbourne. An average speed of just over 80 was then maintained for 26 miles over the gradual descent from Basingstoke to West Byfleet, and the train passed Hampton Court Junction 4½ minutes ahead of schedule. The driver then had the satisfaction of depositing his passengers 2 minutes early at Waterloo.

Column 2 times the “ACE” all the way from Exeter Central. After a slow start up to Exmouth Junction, speed was quickly worked up to 74 down the 1 in 100 to Broad Clyst, providing time in hand for the attachment at Sidmouth Junction. Now with 13 in tow, speed fell to 41 on the 1 in 90 up to Honiton Tunnel, followed by an 82 mph dash down the 1 in 80 through Seaton Junction. The ascent to MP 133¼ was completed at a minimum of 60, followed by another burst of 82 on the descent through Crewkerne. Consequently, Yeovil was passed almost 3 minutes ahead of schedule. A pws to 26 mph after Sherborne hampered the climb to Milbourne Port. A more severe pws to 14 mph impeded progress between Templecombe and Gillingham, which was passed at just 66 mph, preventing a good run at the bank up to Semley. Nevertheless, a creditable minimum of 52 was achieved on the 1 in 100 up to the summit. Another maximum of 82 on the descent through Dinton resulted in just a 2 minute loss on schedule to Salisbury, despite the two pws.

The continuation from Salisbury was another solid performance, gradually gaining time all the way to Hampton Court Junction. With a flying average of 79 between Hook and Esher, and a maximum of 84, the train was just 1 minute slower than column 1 to Hampton Court junction, despite the heavier load. There was another pws at New Malden, but despite this and adverse signals from Wimbledon, the train still arrived almost a minute ahead of schedule.