Steam locomotives such as General Steam Navigation move by forcing high pressure steam top move a piston backwards and forwards within a cylinder. This linear motion is converted to rotary motion by the driving wheels via a connecting rod.

Steam locomotives in the UK general have either: two cylinders (mounted either inside or outside the frames), three cylinders such as General Steam Navigation (two outside and one inside), or four cylinders two outside and two inside).

The motion from the inside cylinders is transferred to the driving axle via a connecting and a crank axle. Each piston is double acting i.e. it pushed by steam in both directions alternatively. The valve gear controls the mount of steam into and out of the cylinders. The driver can control this amount of steam via the reverser which not only changes the direction of the locomotive but also, like gears in a car, the amount of steam being used as speed increases, also known as “cut off”. Used steam is then exhausted out of the chimney.
More details on Bulleid’s chain driven valve gear as being restored on 21c11 / 35011 can be found here 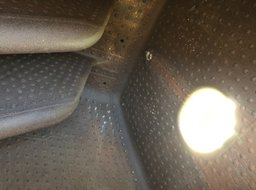 Steam is created by heating water in the boiler, see image above of a traditional superheated boiler with its key to components [click to enlarge]  by burning coal within the firebox. Within the boiler are a number of tubes that the hot gasses from the fire pass through and these tubes increases the surface area in contact with the water and therefore the heating surface to maximise transfer of the heat to the water.
Being a pressure vessel, the steam is routed via smaller diameter tubes and a superheater to increase the pressure up to originally on Bulleid pacifics to 280 psi (later reduced to 250 psi).
Bulleid pacifics also had within the fireboxes were two Nicholson thermic syphons to further increase the heating surface area.
More details on Bulleid's free steaming boiler design as carried by 21c11 / 35011 can be found here 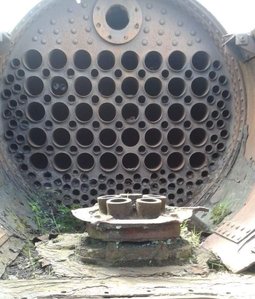 The fire draws air required for combustion via the grate and also to a certain extent the firehole door. The original Bulleid design did not include doors in the ashpan, called “dampers” which would allow the firemen a level on greater control over the fire. The fireman also controls the flow of new cold water into the boiler from the tender via one-way vales to allow water in under pressure via a steam injector, but not allow steam and pressure out of the boiler.

The exhaust steam exits the chimney via a blast pipe this creates a lower pressure within the smokebox to draw more air through the fire bed. This also means that when the engine is working harder the more air is drawn though the fire generating more combustion and heat.

In the case of the Bulleid locomotives a multiple jet blast pipe with 5 jets rather than one, as seen in the image right (along with the front tube plate of the boiler). This has the effect of splitting the amount of steam being exhausted creating a greater surface area of steam and therefore creating a lower pressure in the smokebox to draw more combustible gasses from the firebox through the boiler tubes.