The rear suporting axle of a 'pacific'4-6-2 wheel arranagement is known as a trailing truck. 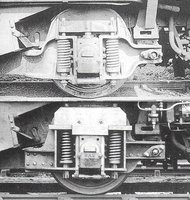 These original trucks with their characteristic arched shaped castings were originally only fitted with an asbestos cloth sheeting to protect the spring beam. This was not in practice very effective and therefore after the war a metal cover was fitted.

The final ten starting with 21c21 New Zealand Line entered service with a new lighter fabricated design that still matched the performance and mounting arrangements of the original cast design to ensure interoperability. 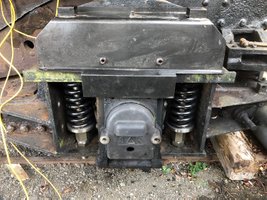 The only fabricated trailing truck for a Merchant Navy that survives is currently on 21c11/35011and this will give her another unique feature when compared to her preserved sisters.

Our current funding objective is to restore this unique fabricated trailing truck that  has led to the Trailing Truck Transformers Fund Club being set up to fund restoration of this unique component in 2021. We announced, on 3rd August 2021, that we have awarded the contract for the restoration of this unique fabricated trailing truck  to North Norfolk Railway Engineering, although critically we still have places available in our exclusive Trailing Truck Transformers Fund Club, that will allow us to complete the restoration of the truck, please click here to find out how to join...

The image bottom right shows the assembled truck on 21c11/35011 from acquired and new components.