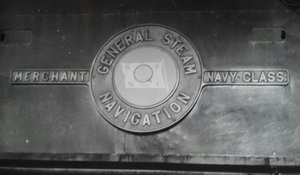 What's in a name and number? - 21c11 General Steam Navigation

Whilst there is an obvious connection between the Shipping Companies and the Southern Railway it was not always the intention to name the new class of Bulleid pacific locomotives after them.

It was intended, according to Bradley in Locomotives of the Southern Railway Part Two (RCTS), to name the class after British land, sea and air victories of the Second World War. Since these, by 1941 and been few and of doubtful authenticity, the idea was abandoned, but not before a trial rectangular wooden nameplate had been prepared for the name 'The Plate'.  This was to commemorate the destruction of the German pocket battleship Graf Spee by H.M Cruisers Exeter, Ajax and Achilles.

Capital cities of the UK and the Commonwealth were considered, but in the end it was the suggestion of the chairman of the Union Castle Line to use the names of shipping companies which regularly called in peacetime at Southampton.

Bulleid’s number system originated from the European practice of a prefix based on the locomotive wheel arrangement, this used letters to denote the coupled wheels and numbers to indicate leading and trailing axles, a pacific 4-6-2 locomotive would be prefixed ‘2C1’. Bulleid decided to adopt an amended version of this system using the coupled wheels letter to split the leading and trailing axles numbers from the following running number, hence 21c11, being the 11th member of the class.

Both left and right handed circular enamelled plates were included within the cast nameplates so that the Companies' house flags depicted flew correctly towards the rear of the locomotive when travelling forwards.
The exception to this rule is 21c6 / 35006 Peninsular & Oriental S. N. Co., whose flag is part of the whole company logo within the enamelled plate so it cannot be handed.

The General Steam Navgation Company was formed in 1824, to read the history of the the Shipping Company whose name 21c11 / 35011 bears click here.

Historical articles regarding the General Steam Navigation Company provided by our member Alan Peake can be read here.