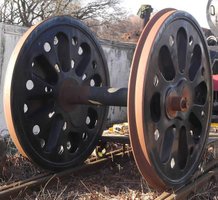 One of Bulleid’s most instantly recognisable features on his Southern Railway locomotives are his B-F-B wheels. 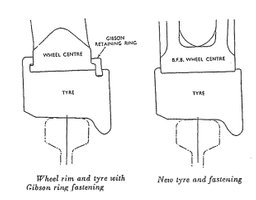 Most UK steam locomotives that have spoked wheels, rim of which has its maximum strength by each spoke but are weaker between the spokes to avoid this disadvantage and also produce a lighter wheel, by approximately 10 percent, Bulleid designed his own, and patented, version of the American cast “Boxpok” type. He designed them in conjunction with the steel company Firth Brown whom advised on the method of manufacture and therefore were part of the Patent. These BFB corrugated disc type wheels are a complex moulding and are cast in one piece. By creating their own design there was no need for any royalties to be paid to General Steel Corporation of Granite City, Illinois for the use of the “Boxpok” design. 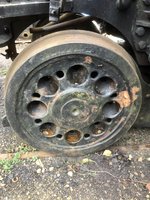 The main driving wheels of all of Bulleid pacific 4-6-2 locomotives are 6’2” diameter with 3'1" bogie and 3'7" Merchant Navy or 3'1" Light Pacific trailing truck diameter wheels, see right.

Just like a spoked wheel steel tyres were also heat shrunk fitted to the rim of the B-F-B wheel centres. Another innovation was the fact that the tyre when shrunk on was secured not by traditional pins, keys or Gibson retaining ring but by a continuous annular corrugated web.

The steel tyres wear in service and can be replaced rather than replacing the whole wheel.

General Steam Navigation requires a new centre crank axle as her original crank axle was swapped for a plain axle whilst at Eastleigh in 1966 just before she was sold to Woodhams Brothers.

This plain axle was swapped again for one from 34046 “Braunton” when both locomotives were on the West Somerset Railway, the wheels on this axle, see picture top right, will be fitted with newly purchased tyres.
The remaining two driving wheel sets on 21c11 /35011 will not need new tyres as she returned to service from an overhaul in March 1965, less than a year before she was withdrawn meaning these tyres did not suffer too much wear.

We have just launched our campaign to raise fund to fund the transportation and tyre profiling of the bogie and trailing truck wheelsets, click here to find our how to contribute.