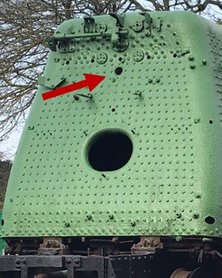 Eagle eyed members might have spotted before the 4-inch or so diameter hole in the back plate of our boiler centrally high above the fire hole that is tubed through to the firebox.

Many of us had not paid much attention to it at this stage, however during a visit to the engine at the July working party by Andrew Marshall from our friends at the 35006 Locomotive Preservation Society, he spotted it and noted that it was a very unusual feature and he hadn’t seen it on any other Merchant Navy boiler before or knew what it might be for. Was it something unique to our current boiler? Was it some form of visual inspection hole to view the top of the fire or for the fitting of an additional measurement device?

We both checked the locomotive works visit record cards for all four locomotives and the boiler record card for our boiler 1097 and nothing was recorded, the mystery deepened…

Andrew Marshall kindly put the feelers out and Pete Mason also of the 35006 LPS has found a very likely explanation, although not perhaps the full story… 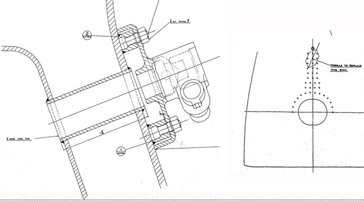 Pete referred to a Southern Railway Drawing dated October 1943 titled “Arrangement of Sand Gun on Firebox Back Plate Merchant Navy Class”. The drawing as can be seen from these extracts, shows the exact tubed hole arrangement at the same location as on our boiler.

It was a known practice amongst crews to occasionally chuck half a shovel full of sand into the firebox when the engine was working hard that was immediately drawn through the boiler tubes to clean them a little and was apparently surprisingly effective at improving the steaming rate. It would therefore appear that Bulleid was experimenting with automating this process. We are still looking further to establish how the sand got up to the gun, or where the sand box was located that fed the system.

The drawing shows that this modification for the fitment of a sand gun was applied to 21c3, but mentions no other locomotives, however as our boiler was never fitted to 21c3 it must have been trialled on more than one locomotive.

So whilst we have most likely solved the mystery of the hole in the back plate some of the final details are still to be discovered, such as when did our boiler receive the modification?

Our boiler 1097 had a new steel firebox fitted in 1947 (the steel fireboxes were all replaced around this time, subsequently  TIA water treatment systems were fitted to the locomotives which prevented excess corrosion), before being fitted to 21c9 was this perhaps when the modification took place?

If anyone has any additional information about the Sand Gun please let us know via email here. For more information on the history and the works record for 21c11 / 35011 see the History and Archive pages here.