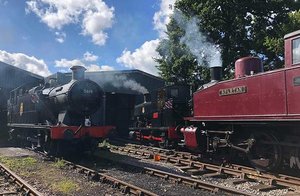 The Swindon and Cricklade Railway

The Swindon & Cricklade Railway is a heritage railway in Wiltshire, England, that operates on a short section of the old Midland and South Western Junction Railway line between Swindon and Cricklade.

Since 2019 the GSNLRS have been pleased to have the Swindon & Cricklade Railway as the permanent home for General Steam Navigation and we thank them for their ongong support and cooperation.

The Swindon & Cricklade Railway Preservation Society was formed by a group of enthusiasts in November 1978 to reconstruct and preserve a section of the Midland & South Western Junction Railway that ran from Andover, Hampshire, to Cheltenham, Gloucestershire.

The volunteer-operated railway has reopened three stations: Hayes Knoll, Taw Valley Halt and Blunsdon the headquarters of the line. Hayes Knoll features a restored signalbox that is operational during special events and a running/restoration shed. The length of the restored line is a little under 2.5 miles (4.0 km). The line extends north to South Meadow Lane (a few hundred yards from the site of a proposed Farfield Lane halt) near Cricklade, and south to Taw Valley Halt on the outskirts of Swindon, near Mouldon Hill Country Park. A southern terminus, Mouldon Hill, is proposed within the park.

The Swindon & Cricklade Railway currently terminates just over 1 mile from the outskirts of Cricklade. The aim is to reinstate the railway line to Cricklade on the original railway formation.They are now seeking funds to progress our development northwards towards Cricklade. See here on how you help with the project.

Any GSNLRS member wishing to work on 21c11 / 35011 at one of our working parties must also be a member of the Swindon & Cricklade Railway this ensures all parties are correctly insured and also provides members all the benefits of being a member of the Swindon & Cricklade Railway as well and we actively encourage our members, who can, to also volunteer on the railway where they can gain expereince in a number of different roles.